Tony fills in for Warren on today's show. 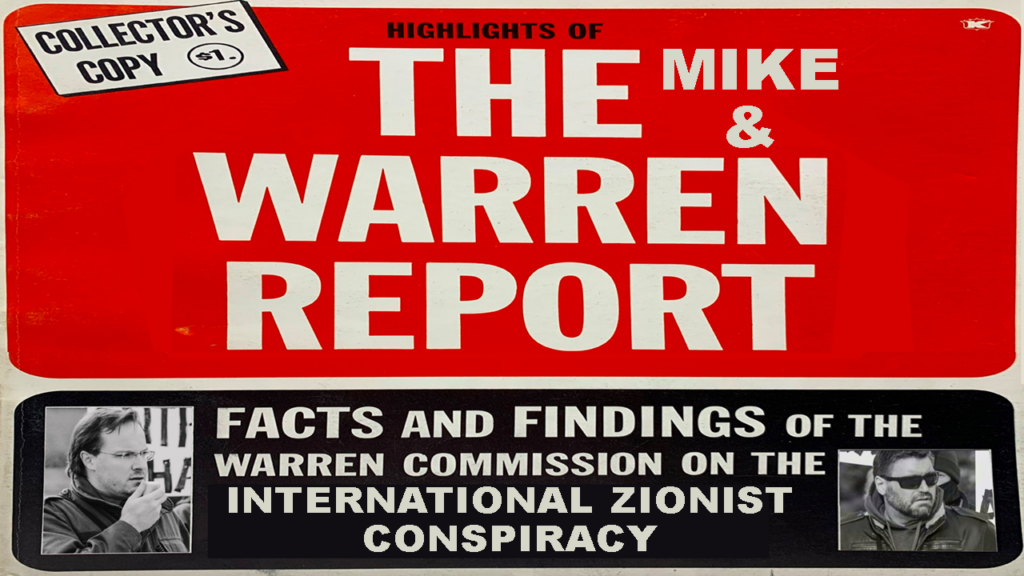 Actually we use VR for machine design. When for example looking at accessibility for operators when installing parts.

It is also a nice application for simulation games/software.

Other than that, no ‘killer’ app is ever made, nor will it be made, because it just sucks.
it causes too many disconnects with the brain because you’re not experiencing the motion, hence you get instantly sick. It’d have to be implemeted in some 4D environment, which puts it utterly out of the pricerange of the commoner, and thus out of any real-world adaptation.

Of course the JBS wasn’t talking about Jews, as Jews were funding JBS, as Revilo P. Oliver found out.

Most JBS people in 1955 probably understood that “communist” was code for Jew, but “that which goes unspoken for long enough eventually becomes unthought” so by 1995 your average Bircher really did think that the problem was communism not Jews.

After the USSR fell, JBS simply started complaining about “collectivism” instead of communism.

Jews understood this that’s why they made sure JBS didn’t talk about Jews, except to officially deny that Jews were behind communism.

I wouldn’t have known anything happened to Jay Leno if it wasn’t for TRS. Jay Leno certainly isn’t our guy but he doesn’t signal as a shitlib either. He’s got enough money that he doesn’t have to worry though. In the NJP ethnostate we could put someone like him in charge of the national automobile museum or something.

I hope that Warrens child shall be a masculine child. (even though I know for a fact that it will be a feminine child this time, but the memes dont die)

Last edited 2 months ago by NormanNC
2

I like the Mike and Tony dynamic a lot

I was in Cali back in the mid to late 90’s and early 2000’s Only thing I remember besides Mexicans were Jews from Romania and the Armenians. The only place I’ve ever seen more Jews was is Florida. .

The Iron Girds of Salvation
Reply to  Trad Goy

My uncle lives in a Sacramento suburb and I remember him complaining about trying to relax in the 24hr fitness sauna after a workout and it always being full of hairy naked men screaming at each other in Russian.

Fatidicus (Sauna Commando)
Reply to  The Iron Girds of Salvation

At least it’s not fags

I have an old Wahl clipper from the 1960s. During the Kung Flu lockdowns, when even barbers were closed, my wife started using it to buzz my hair off. Now she’s my barber. Good times.

Nadir is the low point, zenith is the high point

I remember coming to Ohio back in the day in around 2002 there were a lot of non-white Russians around south-west Ohio. Maybe once I met an ethnic-Russian, and maybe once a white Ukrainian.

I’ve decided Tony is the funniest now that I have heard him on enough podcasts. Gonna need more Tony, please.

Warren gets suspended without pay for having a baby with Emily while Jessie in the past month has completely ran the site into the ground and receives no suspension? Is this the kind of justice we can expect from the NJP?

Spergs Still don’t understand a joke when they see one.

“What kind of shapes are you looking for in your buildings?”

Non-Euclidean and loathsomely redolent of spheres and dimensions apart from ours.

There’s one conspiracy video I remembered showing my friends during my stoner days which I’ve been busting my ass to find.

Someone has to know the video I’m talking about.

Last edited 2 months ago by SUMKAScythian
0

Eh, the Niggers can have Charlemagne..

Come on Tony you should know Loomis isn’t a Jewish name. Jeff Loomis of nevermore, conquering dystopia, and now arch enemy is most certainly not a Jew.

Jeff is amazing.Been listening to him for 20 years. Wish he had input on Arch Enemy songwriting, ’cause they’ve been boring for ages.

Bad look for me. I haven’t listened to them in forever. I actually saw them with the Tim Owens Iced Earth and Children of Bodom when I was in highschool.

Something you guys look past too much is the command from their god to wipe the memory of Edom/Esav(u)/Amalek off the face of the earth. Getting israel isn’t the end goal especially for chabad guys. It’s fixing the world for the messiah to come which requires Edom to be destroyed and the memory of Amalek to be erased. Rabbis everywhere openly say Edom is europe and Esau/Amalek are europe and white america and they say it’s not a nice thing but we gotta go, and that they keep our history to make sure we are forgotten or perhaps misremembered I’m… Read more »

Tony, I never knew you are from Springfield. I grew up near the antique malls. My high school was almost 100% white except for an americanized M’stinx. There were probably a few “fellow whites” but I don’t know. I imagine it has been “blacked” since the 90s. I moved away a decade ago but my folks still live out toward Northridge. Anyway. I’m super proud of you, sir. Hail NJP!

The ones out of town on 40? I actually went to High School at Northeastern right by those. I also used to hangout at the bowling alley in Northridge with my girlfriend and her sister back in the day. Epic Clark County moment.

I love the call out of ‘Charlemagne tha god’ To be honest I don’t even think that nigger has ever read anything about what Charles the Great ever did. I think he just thought it sounded cool and has kept with it.

Last edited 2 months ago by GeorgeHWBush
4

Another interesting ex OSI character is John Loftus who writes fraudulent history books claiming the US govt was a hot-bed of anti-semitism during the war & “writes a weekly column called “spyview” for the Ultra-Orthodox Jewish magazine Ami.”

All content Copyright © My Token LLC, 2022.
All rights reserved.