Jazznds and James blackpill on lumber prices before embarking on Part II of the dead mall to Amazon Fulfillment Center pipeline, this time on the Jewish destruction of John Mackey's authentically pro-worker Whole Foods business model, how Amazon plans to use Whole Foods as a foothold to gigify and destroy grocery and convenience stores as we know them - including Wal-Mart, and force further adoption of new surveillance tech on a massive scale. Meanwhile, Starwood Capital's Barry Sternlicht "loses" 7 malls in his portfolio after values tank, but one neat clause in the contract means the assets go straight to Israeli bondholders. After the break, Trump re-emerges to hurt the Capitol protest cases, Postal Inspectors are re-tooled to pogrom whites, and those infamous 2016 FISA warrants were really about justifying spying for domestic terrorism. If it's Thursday, it's FTN! 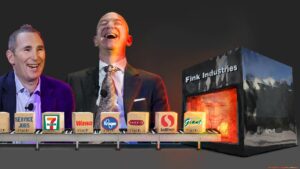 Ah dude, James, you just brought me back to the island for a second. Spam musubi on the way to base every morning for four years lol.

I think unions are a scam funded by the corporate employer to let the employee “think” they have representation but get nothing out of it.

“Intimate details of your pinworm infection…”

Days without discussion of pinworms on TRS: 0

Great episode as usual. Glad someone mentioned ubi in a pessimistic tone, downside potentials are limitless; surveillance, social credit score, exclusion.. Pandoras box for sure.
Whole foods sounds like it used to be a great place. What a shame.

wait how is he frugal if hes driving a honda accord civic, a custom-built one of a kind car. most of us would just either have the accord or the civic, but not a rare mash up of the two

His car wasn’t custom-built. It was just a regular Honda Civic:

This explains why (((South Park))) attacked Whole Foods in their episodes.

You guys need to rename this show to Black Pill The Nation.

So what? They should just stop reporting the truth? You know that’s been the trouble with White people the last 50 years. They keep sticking their heads in the sand when they see something they don’t like.

Yeah, we sure don’t want anybody losing their rose-tinted glasses in 2021. We may be slated for extinction, but at least I can still feel good in my coom hovel.

Shitpost after black pills.
It’s like boofing dopamine suppositories after jumping in a cold lake

After, eh? Classy guy, keeping that hidden under the water.

sheeiiiit i’ll protest 5G. not because of “muh brain cancer” but because i like to stream fascist music from my bedroom PC to my home stereo system. MY NETWORK IS PRIVATE YOU KIKES

Where does one find said music???

I’ve always said Whole Foods is closer to Fascism then any other corp.

I’ll push back a little bit on the QOL for Whole Foods after Amazon buy though — they’re very slowly tweaking things so that people don’t notice. They haven’t really dropped any of the old programs…yet.

Amazon subsidizes a lot of the goods below market prize to capture market and loses money on them for a while in hopes people will start shopping with them, which is where a lot of the cost reduction comes from.

I also think the “I don’t care where my food comes from” people are fuckin retards and have been psyopped by Jewish food companies, so that might have something to do with it.

Those tri-hooks are called “pecking hooks”

When you’re talking Grocery Stores, you gotta have James LaFond, as a guest. He makes the subject so fascinating. Fans of Myth of the 20th Century podcast can back me up.

The different letters of “LGBTQ” represent different types of vermin.

I’m putting up $100 for
The BLOB Acronym Prize
What does BLOB stand for?

The BLOB is a commonly used acronym to explain why blacks fail.

My neighbor, a gigantic Hawaiian fellow, makes homemade Spam musubi. If I buy him a case of Spam he makes me a giant stack of that shit. If I have that in the fridge, that’s all I’ll eat for a week straight. The bacon flavor makes good musabi too.

I had to google both musabi and musubi, what I saw disturbed me.

Bit of a sushi snob tho..

So for those of you trying to keep track at home:
BlackRock
Black Stone
Black Cube
Blackwater (defunct)
Black Creek

Especially when they jump off the Pan Am building.

Look up some of the descriptions of demons from ancient texts.
There were of course giant monster types but the more intelligent ones were described as shapeshifting merchants of sin that used contracts and trickery to subvert and consume on more than one occasion across various religious texts across Europe, funny (((coincidence))) I’m sure.

The answer to BlackRock is Black Sun.

If Jazzhands had a cat would it be called “Titus, Peace Be Upon Him”?

I will never own a cat

👍🏻 Very good. Lol. Cats suck. Except this cat. This is Centurion Cat.

Na, cats are just alpha’s. People can’t force a cat to like them; the cat will give what it gets and that pisses off shitty pet owners.

I don’t mind looking at a cat but keep those fucking creatures away from me. The putrid smell of a cat taking a shit makes dog shit smell like roses.

That just makes them antisocial. Cats don’t want to be part of anything.

Nobody really owns a cat. They just give them free room and board.

I said that too, but that being said it will be the last one I own. Not much of a fan of having pets.

Dogs are the Whitest animal there is. Every White person should have a dog.

“Julius Caesar (100-44 B.C.) reportedly had to remind the citizens of Rome to pay more attention to their children and less to their dogs, because the devotion to dogs was so intense! Have an excellent day today and try your best to take care of both your children and your dogs!”

“Dogs are the Whitest animal there is.”
Agreed.
Makes me wonder about McNabb, sometimes.

Empty mall music is a subgenre of music on YouTube. I thought it’d be appropriate for today’s FTN.

Brought to you by Amazon-Fink Industries!!!! :
The Holodomor for people who disagree with Jews!

Remember when AOC made a genuine effort to keep Amazon out of her district and Conservatism inc was taking pot shots at her. Mmmbased in hindsight

Jazz’nds needed to build a birdhouse

Oh No! SDS leads to neoliberalism. Bring back the real left!

Spaceman: always has been.

This episode is scarey.
Jews are literally setting stuff up via corporate and equity control so that they can deplatform any political dissident from anything, including from eating.
Holy shit Batman, Jews are doing it again!

Comfy artwork will return when MMMThanksgiving rolls around.

Without fedposting I think it’s fair to say that things are going to get spectacularly brutal for everyone in this country, worse than we could have previously imagined. Its unavoidable at this point

Like Mike says, the mask issue is a huge finklethink game. It’s literally to give Republican retards something to complain about INSTEAD of race just as Whites are a year or 2 away from minority status. Mike is right.

In 20 years people will be like, what were White people DOING the year they became a minority? Answer: 1984 posting about masks. 😐

Masks ARE ALL CONSERVATIVES AND TRUMPTARDS ARE TALKING ABOUT.

Well shit dude, you don ‘t want to be RACIST do you???

After all, republicans are the anti-racist party!

I actually have a novelty take on masks. Conservatives are finally starting to push back on conspicuous consumption, in this case mandatory consumption. They are the Thorstein Weblen luxury belief signaling mechanism for libtards. Custom masks identify affiliation and tribal loyalty. Think about this. How much have you spent on maaasks since last year? It’s a huge industry now and this double mask bullshit is the final step. Plus you got the face shield bullshit. Specialty masks for musicians and so much more. They have to go harder on masks becaus BIG MASK is going to start running out of… Read more »

Remove boomers and white people are already a minority I would bet, I’m a millennial and have traveled a bit around the east coast, walking though most towns I saw a lot more non whites than whites. It’s worse the younger you go, former acquaintances I have spoken with in my age range who have kids told me some horror stories about the demographics in elementary schools.

Saddest part is that even seeing everything first hand the shitlib conditioning is so strong that white parents blame their own children for not fitting in among the non white hordes.

That’s disgusting. I can’t express how much anger i have towards those types of parents. Colin Flaherty used yo talk about how a lot of Whites never finished high school cause it was a dangerous and antisocial atmosphere for Whites. And how X percentage of Whites had THEIR WHOLE LIVES altered by that, not finishing High School. They just dropped out of society to a large extent or clunge on at the edge. That effect is probably happening even more now. And for their own parents to not care and even then jusge their kids for it is disgusting. They… Read more »

I built my wife two planter boxes in spring of 2020 for about $30. This weekend I built her two more of the same size with the same kind of wood and it was $120. Cost to yield ratio was still desirable so I pulled the trigger but the nausea I felt handing that money to the faggot at the building supply place was extreme.

Spam tastes so good camping, but no matter what I do at home, Spam tastes like doo doo. Made the mistake once of using Spam instead of ham on Hawaiian pizza because mokes love their Spam so it made sense at the time. It was nasty. Stick with ham. Bacon might be good tho. Garlic chicken pizza is good, but I digress.

For some reason I’m vaguely disturbed by this post.

I eat one of these every morning for breakfast:

Finkle-think for dummies:
People who have everything in common are driven apart for made up reasons.

And then giving Shlomo whatever the fuck he wants.

No problem fens. Here’s some bonus on JANAs Partners: on the Jew Scott Ostfeld. He also worked for Credit Suisse First Boston which underwrote the original Amazon IPO. So, from working there, he knew all about what was going on there and tracked the company’s progress. He also serves on the BOD of Conagra Brands which stocks Grocery Store shelves–you know like a huge conflict of interest. Gee, was WholeFoods, going thru the big guys like Conagra before? Not really that much no. Are they now? I don’t know, why don’t you ask fucking Scott Ostfeld. And another on Barry… Read more »

Looks like another truly blackpilling episode. Oh, well. That is the absolute state of union these days… Nice work, Frontierland.

Last edited 1 month ago by Baggins
9

What’s blackpilling? The worse, the BETTER!

People are going to love this.